One of the first things I did when I joined Twitter in 2008 was to begin a (nearly) daily posting of the number of eggs our flock of laying hens had laid to that point in the week. The typical posting looks something like this:

Good evening. WBFDE closed the day at +56 for the week, with a production cost of $2.69 per dozen.

Nearly every day for the last seven years. Sometimes, particularly early on, I would translate that last part into another nation’s currency. Like this:

I once had a response on Twitter from someone in Russia asking what this was and where it could be purchased. They weren’t the first or last to ask. Those are reasonable enough questions and the answers are straightforward enough. WBFDE stands for Wilder Brook Farm Delicious Eggs and when we have enough extra to sell you can pick them up at the farm. Or outside of Clare’s office in the village. 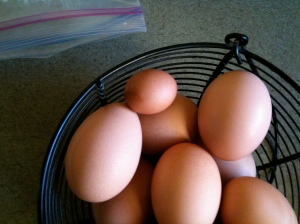 No one has ever asked me, though, why I post this information. That too is simple enough. In a complicated sort of way.

At that time we were fairly early on in the financial crisis that cost so many so much. Except, of course, those who benefited from it. One of the striking features of the reckless wagers that were so much part of the fabric of this meltdown was the securitization of just about everything, including mortgage debt. So-called “mortgage backed securities.”  I remember listening to one episode of the Planet Money podcast whose producers sought to unravel the wild tangle of things that were part of the mess of toxic assets that the U.S. government bought as part of its desperate attempt to shore up the financial system. I was struck by how investors, before the crash, had feverishly been buying up securities with very little idea of what was actually behind them.

So I created a security that I felt I could vouch for.

WBFDE represented something quite tangible. I’ve known every member of the flocks who have laid these eggs. They greet us every morning with their impatient exclamations as they await their food and access to the yard outside their hen house. I know what the cost of their feed is and have been buying it from the same farmer all these years. The production cost rises and falls with the cost of feed, which rises and falls with the cost of fuel. And with the turn of the seasons – the chickens eat less grain during the summer months when they have less need to warm themselves and more access to forage. The color of their egg yolks changes during the summer also, becoming a deeper yellow reflecting this change in the chickens’ diet.

Like the rest of the economy, however, every now and then there are surprises that can and have upset things even in this bucolic setting. One time in the late Fall I entered the hen house to feed and water the chickens and while part of my brain noted that the coop was unusually quiet, it wasn’t until I opened the door and saw the dead hen in the middle of the floor that I fully understood what had happened. Or thought I did.

A weasel had found a way into the coop and killed and bled the hen before leaving through the same small hole through which it had entered. I had noticed this hole a few days earlier and had been meaning to patch it up, so was kicking myself as I picked up the hen and laid her down in the entryway of the coop, before returning with water for the remaining hens. It was only then, when I stepped back into the coop, that I noticed that it wasn’t just the one unfortunate hen who had been killed. It was the entire flock.

So I patched the hole.

Another time my son and I fought off a rabid raccoon trying to climb the fence into our chicken yard. That was a grisly affair that I hope not to repeat. We’re generally opposed to guns, but wished we’d had one at that moment.

Two summers ago a local black bear developed a taste for chickens. It liked the younger birds, and liked them enough that it took to making the rounds to the surrounding farms in about a three mile radius, breaking into the coops by pulling doors off their hinges and board from the walls. It really was a mess.

Eventually a farmer a couple of roads over had had enough of it and she shot the bear. That following winter the winner at the Charlemont Inn’s annual chile cook off was a chile named Bear Chile, an entry by that same farmer.

“I know exactly what that chile tastes like,” I said to Clare. “What?” she asked. “Chicken!” I responded.

Anyway, even with these occasional misadventures, the hens and their eggs are a predictable affair. We begin a new group of layers every year, and it’s always one of my favorite days of Spring when John from the Post Office calls to tell us that our chicks are in. And we always get a kick out of the first eggs the new layers produce. They’re really small, and we joke that they’re perfect for the low cal omelet I should be having for breakfast.

It’s nice to have one little piece of the economy that is a mystery I mostly understand.